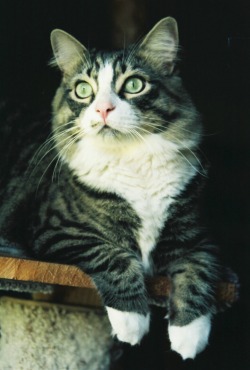 Forest was adopted in 2006 at the age of 4 months from New Beginnings cat shelter in Bourbonnais, Illinois. He was found near the University of Chicago Hospital, trying to get into a storm sewer hole. He was brought to the shelter and was seriously ill with various intestinal bugs. He underwent treatments and is unbelievably healthy, smart and handsome. He loves people. He met me at the shelter after two of my cats passed away at the ages of 16 and 17.

He is known, among many pet names,
as "my little forie." 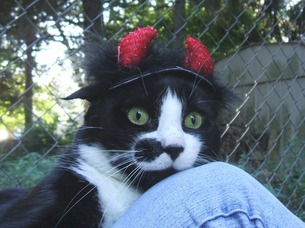 Captain Jack Sparrow was initially named Sparrow. He was found in 2003 at the age of about 3 or 4 months under a bush near a friend's house and was infatuated by sparrows sitting in the big bush above him. Sparrows, Shamans say, are messengers of "finding your soul song." Jack is very long and tall - and is a flirty boy, kind of like Captain Jack Sparrow in the movies, Pirates of the Caribbean. Thus, his name evolved. He's my little devil - as you can see - a gentle giant who is so shy, but loving.
He weighs about 18 pounds. An image of him appears on the "pet portraits in graphite" page. 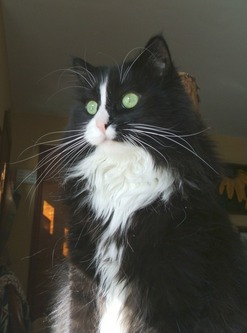 Joan of Arc was found in 2000 on a June evening after dark. I was driving along a side street and my car went over two objects in the road, my tires straddling the objects. When I passed over the objects I saw glowing eyes looking up at me. Joan and her sibling were in the street together. Her sibling was deceased. I laid the little body on the curb and carried Joan close to me, driving her home to become one of my family. She hissed at me with all of her might - a brave young girl at the age of 1 month old and merely 1 pound. She had a broken toe and had gray paint splattered around on her little body. I cleaned her up and my other furry children cared for her like she was always part of our family. She's a pistol - fiesty little girl who loves to escape the chainlink fence in my yard by climbing over it. She's a beautiful girl. An image of Joan appears on the
"pet portraits in graphite page." 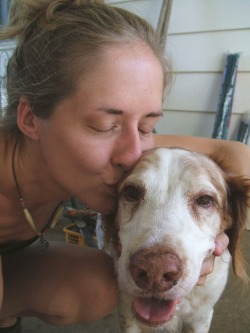 Speckles was my baby boy. He was a Brittany Spaniel who came into my life at the age of 3 months. At the age of 11 he developed two serious conditions that came on mysteriously: partially collapsed lungs and a paralyzed larynx. He passed away in a traumatic way on Thanksgiving of 2007. I miss him every day. He was a riot and very loving to everyone and everything. His best buddy was Captain Jack Sparrow. They enjoyed walking around the perimeter of our fenced in yard together. I always kissed him like you see me doing here. This picture was taken before he was diagnosed with his health conditions, and four months before he died.

You can see a picture of him at three months old on the "pet portraits in graphite" page. 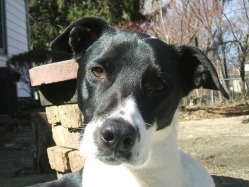 Trucker is my newest addition to the family. He came from Animal Haven/Kankakee County Humane Society. I adopted him at the age of 5. His birthday is February 2, 2004. He has had a turbulent life and is enjoying stability in a "home" with love. He initially received his name at the age of 8 weeks when he was tossed out of a semi truck along a road. Someone saw it happen and picked him up - but that person didn't care for Trucker the way they should have. That person sold him at a garage sale. Trucker then was a victim of a divorce situation. He is part pointer, greyhound, lab and something else - we are not sure! He's a gentle giant. 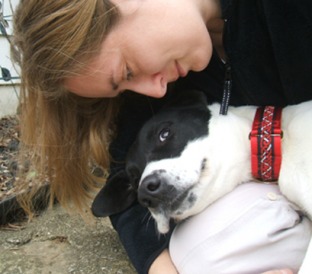 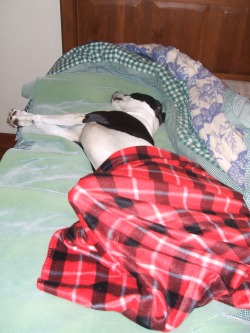